FOIMan summarises what you need to know about data protection laws.

The General Data Protection Regulation (GDPR – Regulation (EU) 2016/679 to give it its official nomenclature) entered into force in 2016 and has fully applied since 25 May 2018.

BREXIT will not kill GDPR

On the day that the UK leaves the European Union, all of EU law will be absorbed into UK law. The National Archives have done a great job of reflecting that in the legislation.gov.uk website, where you can now find all EU law that will apply. Over time, the UK government and Parliament will repeal EU laws as required. GDPR is no different. Until and unless the UK government repeals it, it continues to apply in the UK.

That said, the government has passed regulations which will amend GDPR on the day that we leave and create something called ‘UK GDPR’. Effectively what the regulations do is remove references that no longer make sense once the UK leaves the EU, such as references to Euros and European institutions. So BREXIT will change GDPR – but not in any great substance in respect of its day-to-day application.

What does GDPR do?

The General Data Protection Regulation (GDPR) does what it says on the tin – it regulates for data protection. This means that it sets out the rules which apply to any legal entity in the EU/UK that uses data relating to individuals. Even bodies outside the EU and UK have to comply with those rules if they handle data about individuals in the EU or UK. It also sets out individuals’ (extensive) rights in relation to this data. This data is referred to as personal data.

So why do we have the Data Protection Act 2018?

Think of GDPR as being like a Swiss cheese – it’s full of holes. Wherever the members of the EU couldn’t agree on how the law should work, or where they simply felt that it was appropriate for countries to decide what they did in certain areas, GDPR left it to member states to fill in the gaps. In the UK this was done with the Data Protection Act 2018 (DPA). Examples of gaps filled by the DPA are:

DPA filled in all these gaps, and also amended other legislation to ensure that GDPR and the DPA could be incorporated into the existing body of UK law.

What is personal data?

GDPR (and the DPA) set out the rules for handling personal data. Personal data is ‘any information relating to an identified or identifiable natural person’ (GDPR Art. 4). Natural person just means ‘individual’ in this context, as opposed to a ‘legal person’ which can be any legal entity – including government departments and multinational corporations. The really important word here is ‘identifiable’. This means that information can be personal data even if we can’t immediately identify who the person it relates to is. As long as we have the means to identify them – perhaps a key, or institutional knowledge – then it will be personal data. A photograph can be personal data even if it doesn’t have a name attached to it.

What are data controllers?

What do these data protection laws require us to do? 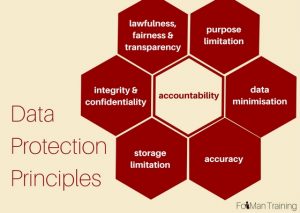 At their simplest, GDPR and DPA require data controllers to ensure that their handling of personal data is consistent with the data protection principles. The graphic illustrates these principles.

What rights do people have?

Individuals have more rights than they used to. These rights include the right to:

Most of these rights are qualified – i.e. there are exemptions that restrict them in some circumstances.

What responsibilities do organisations have?

GDPR requires data controllers to act in a way that is consistent with the data protection principles. In some cases it goes beyond these though and requires specific actions to be taken.

What happens if we fail to comply with data protection laws?

The Information Commissioner has lots of powers to enforce data protection laws. These include significant fines as you’ve probably heard, but also the ability to force organisations to stop handling data if it is being used in a way that breaches GDPR. In certain circumstances, individuals can seek compensation from organisations if a breach of data protection laws causes them problems or distress.