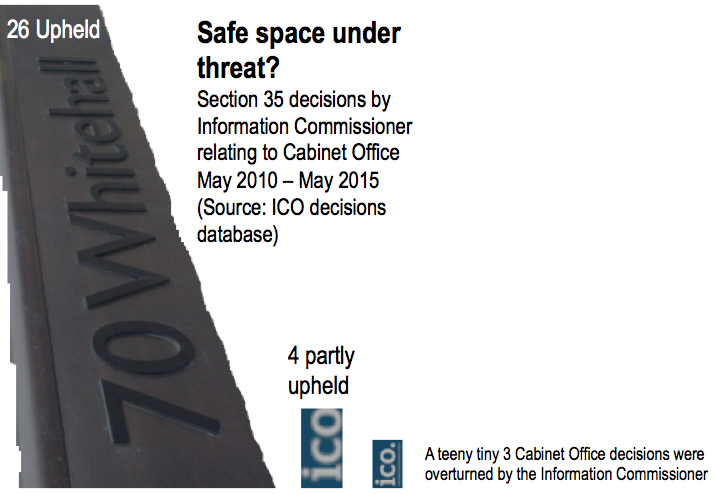 Last week an FOI Commission was set up by the government, and one of its aims is to consider “whether the operation of the Act adequately recognises the need for a ‘safe space’ for policy development…”. The section 35 exemption described in the last Exemption Index post can only be used by central government and it is designed for exactly that purpose. The Commission may find the image above helpful in reaching a judgment.

Incidentally, the three decisions that were overturned were refusals to disclose:

The post above was a bit of an experiment, prepared in a hurry. It was only afterwards that I realised that the figures here are just the tip of the iceberg.

If you look at the Ministry of Justice’s annual reports on government FOI performance, you can see how many FOI requests were received by the Cabinet Office over a comparable period (it would be difficult to directly correlate the two sets of statistics, but for these purposes the five year period 2010-2014 should be close enough). You can also see how many times the Cabinet Office applied the section 35 exemption over this period:

In other words, the use of the exemption for policy development and formulation, protecting the safe space which the government believes to be under threat, went unchallenged 93% of the time. The three cases that the Commissioner overturned represent approximately 0.6% of the use of s.35 by the Cabinet Office. (Taking into account the partially overturned cases, it rises to 1.5%).

I should also say that the reason I selected the Cabinet Office was that they use this exemption more than any other government department.