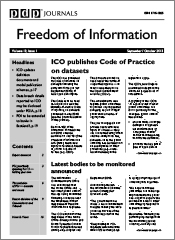 This month’s article for PDP’s Freedom of Information Journal expands on my previous posts here (and here) on research into the cost of public relations as opposed to the cost of FOI. It seems timely to make this available now given that this issue has been mentioned in evidence given to Labour’s alternative FOI Commission this week. The article explores how I conducted the research, what my findings were, but also the way that government departments handled my FOI requests. Suffice it to say that central government would do well to review its own procedures and practices before reforming the legislation.

Rumours reported in the newspapers this week suggest that the government is getting cold feet about the FOI Commission and any proposals to weaken the Act. Perhaps the 30,000 responses to the Commission’s Call for Evidence, many of which sought to defend the legislation, have weakened its resolve.